It was a bit of a shock to my system to wake up in the dark this morning despite the fact that the alarm was not set for an outrageously early time, and perhaps more of a surprise that it really wasn’t properly light until about 9.30am, by which time we were already half an hour into our informative tour of the city of Bergen 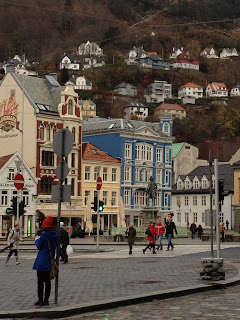 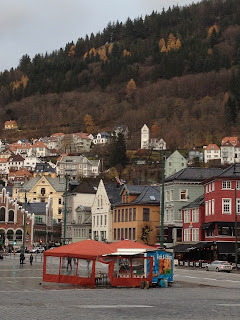 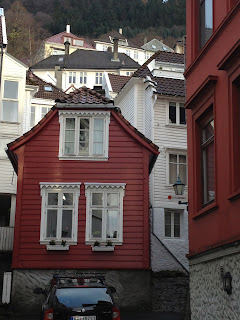 We had a very knowledgeable tour guide who pointed out all the buildings of note and gave us lots of information about famous people who lived in Bergen, who include the composer Greig, the writer Ibsen and the fascinating violinist Ole Bull (a Justin Bieber of his time perhaps) who apparently was so gorgeously handsome that many of his female fans got themselves in such a tizzy that they commonly fainted during his performances! I have made a note to self to look on line for images of this chap, to see if he really was as gorgeous as the story suggests, or whether Norwegian women were simply easily pleased! 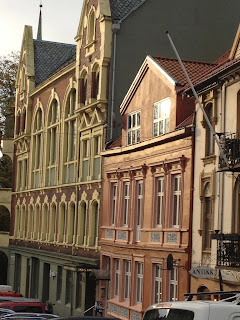 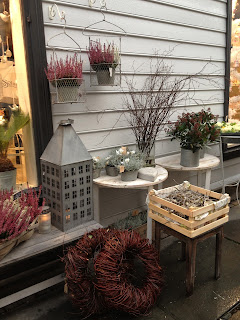 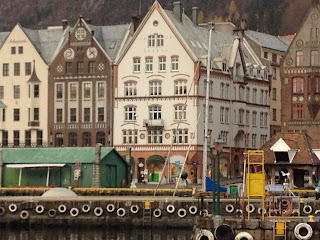 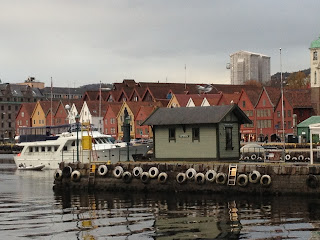 After the tour (and a subsequent ‘fishy’ lunch in the fish market) we took a walk around the shops and appreciated the architecture all over again. To walk around the Hanseatic Wharf buildings – which I had admired from afar last night – was a real treat and like taking a step back in time. Standing in the narrow, wooden clad streets it was easy to imagine the traders and the fishermen discussing their bargains and bartering their prices, swapping fish for grain and visa versa. I took a walk around the back streets falling in love with all the wooden clad houses, painted in a wonderful palette of chalky blues, ochres, pinks and reds, alongside white and olivy green. By the time I was walking back to the hotel, the sun came out and changed all the colours all over again, making us do a mad dash out onto the deck to grab a picture of the mountain side bathed in sunshine. 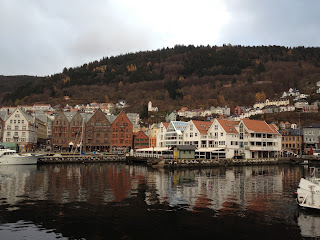 This evening we have boarded the ship MS Midnatsol and are about to set sail on our trip along the Norwegian coast. I’m so excited I’m not sure there will be much sleep in me tonight, but need to have my wits about me for the knitters in the morning…
Posted by Jane Crowfoot
Newer Post Older Post Home