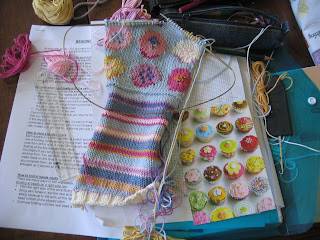 I remember many years ago a guy at a party standing open mouthed as I gave him my response to his question ‘So what is it that you do then?’ Expecting, no doubt, that I was going to tell him that I worked part time in a supermarket, or was a PA, a bank clerk or a stay at home Mum, he was pretty dumb struck when I explained that a lot of my time was spent encouraging people to brush up their knitting skills.
I’m fairly sure he made one of those noises that men are good at – a cross between a cough and a suppressed laugh. ‘No, I meant what do you do for a living? He said.
I think that this man had visions of me sitting in a dingy living room with a bunch of old grannies discussing tea, cakes and the young folk of today and all that was wrong in the world. So, through gritted teeth, I explained to him that I did demonstrations, talks and workshops, that I wrote for magazines and that I had done 3 years of training to degree level in textile design as my background to enable me to do my job well.
Needless to say our conversation was pretty much over before it started and no doubt he wondered if I was having him on. Maybe I became the topic of later conversations when the party got into full swing. I imagine my career being discussed in the same style as a bad joke – ‘Hey, have you heard the one about the girl who teaches people to knit.....?’ With much raucous laughter ensuing.

I have many friends who still don’t quite understand what it is I do. This doesn’t actually bother me any more, because to be fair, I probably don’t understand quite what it is that they do! What does bother me though is my friends’ assumption that my job is easy and that given half the chance they would quickly learn to do it as well as me, a bit like me assuming I could handle a complicated set of accountants books within the first hour of me buying a calculator. Most of my friends -when asked if they would like me to teach them to knit- have said ‘No thanks, I don’t have the time to knit’, as apposed to ‘I don’t have time to learn to knit’. In my experience adults actually take longer to teach to knit than children, I think the reason for this is that having made the decision to learn they are surprised not to pick the needles up and have a sweater hanging from them pretty sharpish. Adults assume they will not make mistakes and get cross when they do, whereas children tend to enjoy the learning process more, not caring if they have dropped stitches or end up with double the amount at the end of the row. Children are used to learning slowly; they don’t expect to grasp things the first time round, whereas the adults around them seem to be in a continuous hurry to learn as much as possible in the shortest possible time.

In the same way that novice knitters expect to grasp the stitch techniques quickly the identical thing can be said of experienced knitters wishing to design their own knitwear. Over the years I have met many workshop participants expecting to walk away from a design class knowing all there is to know about the design process. Well known designers such as Kaffe Fasset and Martin Storey have spent many years perfecting their skills. They have probably produced literally hundreds of sample swatches and have also almost certainly experienced a fair few disappointments when the design that they have carried in their head doesn’t work out the way they had envisaged. This frustration, however, does not stop them from designing, in the same way that a dropped stitch does not prevent us from knitting. The keys to learning to design then have to be patience first and then practice.

Many designers surround themselves with their ideal inspiration. For Kaffe this inspiration comes from colour and geometric surface pattern, such as tile and brick patterns. Debbie Abrahams –author of many books and the brain child behind The Mystery Blanket Club- is another fan of surface pattern. She finds her inspiration in greetings cards and wrapping paper and collects these by the dozen to create her mood boards which act as a catalyst for her design stimulation. For other designers such as Sarah Hatton the inspiration comes from texture, so she is no doubt interested in creating the perfect feel and touch for her fabrics which often feature intricate stitch combinations and cables. Alison Crowther Smith -author of Shibori knitted felt and Little Luxury Knits- says ‘My inspiration comes mainly from vintage fashion, knitting and home publications and magazines. I love old fashion magazines and books on clothing design from the 1920s to the 1950s. I also turn to modern interior design magazines and source books especially for inspiring use of colours and textures, which can often be very successfully applied to knitted fabric, especially if felted. I am at heart a texture girl - texture from knitted features such as big fat cables and tactile bobbles, or extras such as frills, beads, sequins...’

You will notice that many designers also have their own favourite colour combinations. Kaffe tends to design using colours from the warm side of the colour palette, such as red, burgundy, orange and pink. Kim Hargreaves on the other hand often opts for a much cooler palette, preferring light blues and greys. She also uses cream and ecru tones a lot which are great for showing stitch definition and the finer design details. If you want to get seriously involved with colour it is worth investing in a nice colour wheel which you can get from an art shop. Try and find one which shows the complimentary harmonies of a colour. Colour wheels are really useful if you are thinking of changing colours in an existing design.

When Stephen Sheard and Simon Cockin came up with their first yarn shades for hand knitters they found they had a palette which reflected their Yorkshire surroundings. They chose earthy browns and yellows, heather shades and brick reds along with stormy greys and dusky shades of blue. It was this range of colours which first captured the eye of Kaffe Fasset who stumbled across them and was instantly smitten. The Rowan colour palette is now far greater than either Stephen or Simon could ever have imagined, with every conceivable taste being catered for. Not only that, but advances in the way that yarn is sourced and dyed now means that you can get your hands on almost any thickness of yarn in more or less any fibre content.

Knitting from a pattern takes a lot of skill, I have already established that, but it is the design process and the mastering of it which will take the knitter another step forward on their quest for absolute knitting fulfilment! Seeing your own design through from the early stages of pencil drawings, magazine clippings and mathematical calculations to the finished knitted pieces is an incredibly awarding experience and one that I heartily recommend. Whilst there is no getting away from the fact that the design process (as with the learning to knit process) can be pretty laborious in the early stages, the rewards are worth it. And, if you ever bump into that guy at that party, and he asks you what you do, you can answer him safe in the knowledge that what you do in your spare time is far more exciting, productive, relaxing, therapeutic and fun than anything that he might be doing!
Posted by Jane Crowfoot
Newer Post Older Post Home