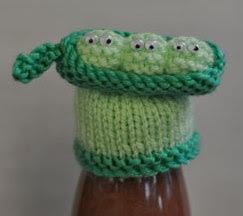 Ready Steady Go –'The Big Knit' has officially cast on!
A regular event in the knitting calendar, The Big Knit 2010 has just been launched so now’s the perfect time to use up your left over yarn and get knitting to support people in later life across the UK.
Every year for the past seven years, people across the land have knitted their socks off in aid of the annual Big Knit campaign run by the chaps at Innocent Smoothies. So far they have received a whopping 1.6 million little hats and raised over £800,000 for Age UK (formerly Age Concern and Help the Aged) - all to help make winter warmer for older people.
For 2010 each be-hatted smoothie sold in Sainsbury’s stores will raise 25p and the target is £200,000, which is quite a pile of hats. This is why they need your help -simply pick up your needles or crochet hook and make them a little hat. Better still get together with your friends and create a few more.
The basic knitting pattern is only 28 stitches and 18 rows – that’s not even a tension square. Perhaps you could whizz one up during EastEnders or Corrie; imagine how many you could do in a month! In fact the deadline for hats isn’t until 5th October so please try and fit a few!
Innocent will be putting up lots of fun patterns and announcing a competition or two very soon but for now just go to their site to get started.
A huge thank you from everyone at innocent and Age UK.
Posted by Jane Crowfoot
Newer Post Older Post Home