Over the past month we have been up to our necks in show season - Yarndale was once again an amazing (and bonkers) experience and this was followed by another incredible week at The Knitting & Stitching show here in London. Doing shows and workshops is a really rewarding experience for me as a designer and I love meeting fellow crochet enthusiasts and chatting to people about their love of crafts. One of the most common questions and comments we get at shows in particular is in relation to colour, with people often asking how I choose shades for a design or how I make a palette that works, so I thought I would use this post, which is the second of a series of posts in the Stylecraft 'Blogstar' series, to talk to you about colour…… 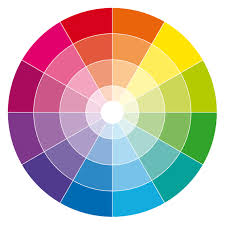 Colour is a very personal thing, but for me playing with colour is possibly the aspect of crochet designing that I enjoy the most. I love the complicity of making designs work mathematically and logically and coming up with good stitch combinations too, but in the end it is the colour combinations that I think really decide whether or not a design is going to work.

I have said many times that I am not a fan of granny squares and I don't really get this whole craze for regurgitating existing crochet designs such as granny squares or chevron patterns over and over again in varying 'new' colour combinations, but this is because I really enjoy a technical challenge and therefore don't really want to design 'easy'. I try and design in a way that creates a new interest on every round or row, partly because I get bored easily (5 or 6 repeated motifs is my maximum) and because I want to give other crocheters something to really get their teeth into. All this said, the thing I do love about a granny square is the fact that it can allow you to really play with colour and they can be a fun mindless way to come up with a colour palette. The new soft back cover of my book The Ultimate Crochet Bible has a lovely mix of Granny Squares on the cover: 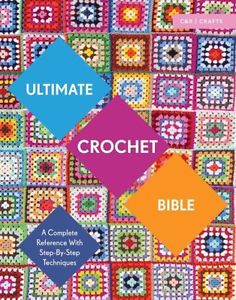 My Great Grandmother was an avid crocheter - she learnt to make Granny Squares in her 70s and she lived to 98, so she had nearly 30 years of Granny Square making! I remember sitting by her side while she chose her yarn shades and laid out her blanket squares (of which she must have made literally thousands) ready to make her blankets. My Great Aunt used to say that my Nanna quite simply had an absolute love of yarn and colour, so I am guessing that is where I get it from! The image below shows one of Nanna's lovely blankets folded with some of my own projects. 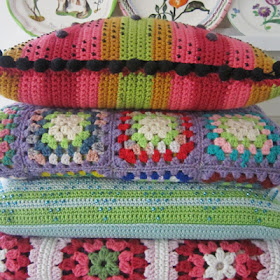 When I start working on a new design I rarely make an absolute decision about yarn shades before I start - I tend to gather a large palette and pick and choose shades from it as I work through a design. 8 shades is probably an average choice for me; some designs could stretch to as many as 12, but this could mean lots of left over yarn if the design becomes a blanket or cushion project, so I need to keep an eye on how much of each yarn is used. I tend to pick one really dark shade and one really light shade, then a couple of mid tone shades and a couple of bright zingy shades and then I go from there. The palette for the Blog Stars tour was chosen by the guys at Stylecraft and we had the choice of 2 colour ways of Special Aran - I chose 'Recipe 2', which includes 1 ball of each of the following shades: 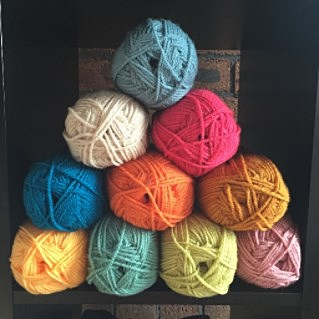 Emma Varnam kicked off the Blogstar tour yesterday with her blog about her lovely Blencathra Blanket which uses the alternative pack of colours pictured below. Both yarn packs are available through Stylecraft stockists and we will have a limited amount of stock on the Janie Crow web site. 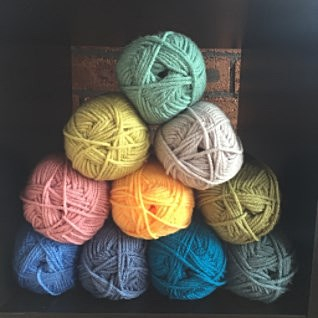 When I work on a blanket design, especially the more complicated CAL designs, I tend to end up with a lot of left over ideas and motifs that didn't make it into the final design. As the colour palette for the Blog Tour had already been decided for me I thought it would be a good idea to use a hexagon motif that didn't make it into the final Frida's Flowers blanket to play around with colour combinations. For almost all of my projects I design the motifs and stitch variations from scratch, rarely referring to stitch libraries or the work of other designers. I do this for my own sanity (as I said before I am the type of person who constantly needs to challenge my brain) and because I don't really see the worth in simply recolouring existing designs.

I am going through a very definite orange phase, so the first shade I was drawn to when I opened my yarn pack from Stylecraft was 'Spice'. A customer recently told me she hated orange and that she would never buy a design with it in, but I think it is a fabulous colour and can really make a colour palette work. My first motif used Spice in 2 rounds with Parchment as the edging. You can see the progression of my yarn choices on each of my repeated blocks below and the pattern is posted with step by step images further down the post.

I was relatively pleased with this motif, but felt that there was too much orange in it - despite my new found love of the shade!

For Block 2 I swapped the shades around completely and left one shade out. I like this block, but maybe the light pink shade (Pale Rose) gets a little lost and merges into the outside edge shade (Parchment).

Using the dark pink (Pomegranate) in place of the Pale Rose made Round 9 stand out far more, but I began to wonder about my choice of Parchment for the final 2 rounds, so for the next block I swapped in Gold for Rounds 10 & 11 and changed the other shades around again too!

I like Block 4! I like all the blocks for different reasons, but in this one I really like the subtlety of the light green (Pistachio) after the blue shades of the central flower.

When I completed Block 6 I was really happy with the colours. I really like the green flower in the middle and the pink to red shades in the outer rounds, however I then decided that I had totally overlooked one of the other colours in this pack - Storm Blue (one of my all time favourite shades in the Stylecraft range), so I decided to do my seventh block in the same shade order as Block 6 only with Gold and Storm Blue swapped over. This is the also the block that I used for the step by step images. It is shown below surrounded by the other blocks:

My motif has 11 rounds and there are 10 shades of Aran in the Special packs so this is a great motif for playing! I had to stop after 7 blocks purely because of time restraints, but it is incredibly tempting to start more and more blocks!

If you would like to make your own block the motif pattern is below:

Using your choice of shade of Special Aran and a 5mm hook make 5ch, join with a ss to form a ring 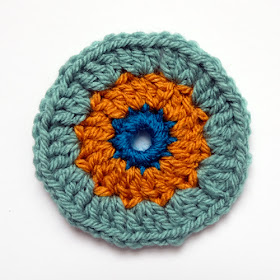 Round 3: Using your next choice of yarn shade and working in front of the previous round join yarn into any skipped stitch by working 1ch + 5ch (counts as 1tr & 3ch), 1tr into next skipped st, 3ch; repeat from * to end, ss to join, fasten off. 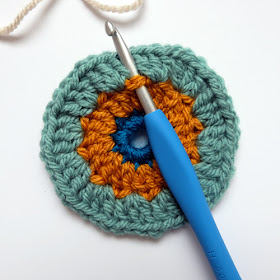 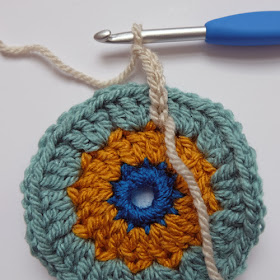 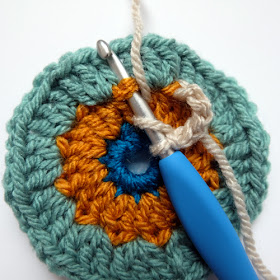 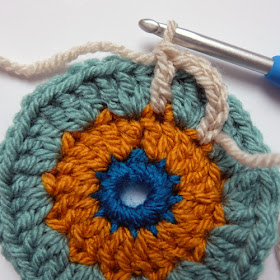 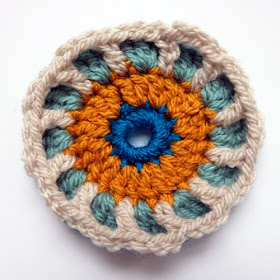 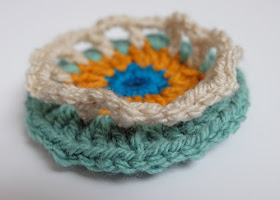 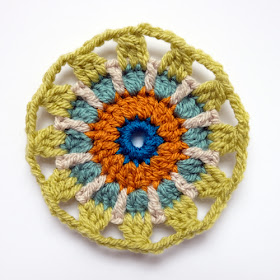 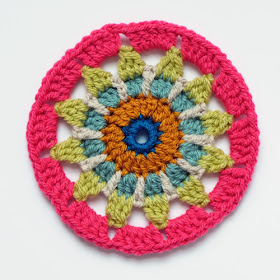 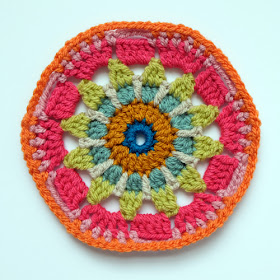 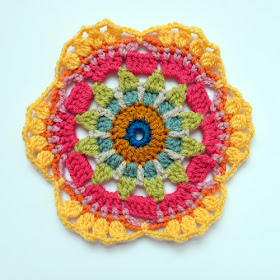 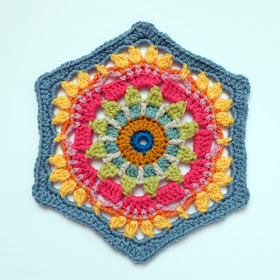 So, with 7 blocks under my belt I am beginning to feel like I am getting somewhere with the colours!

I really like the Storm Blue edge on Block 7 and like how it works with the Gold edging on the other blocks. I think it would be fun to make this a blanket project and I have a feeling there is possibly enough yarn within the 10 ball pack to make at least 20 motifs, so long as the shades are jiggled around a bit. If I have time I will play with this a little more, but in the mean time it would be great to see some of your colour combinations, so do send them as messages to the Janie Crow Facebook page or email them to mail@janiecrow.co.uk, alternatively you can send them to one of the Stylecraft Facebook groups. 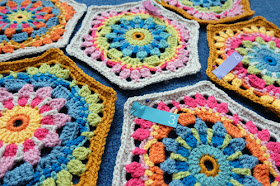 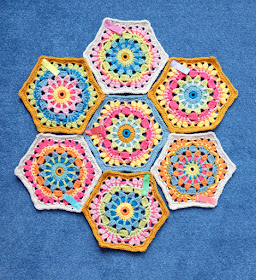 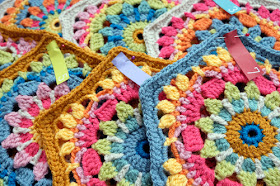 If you would like to win a pack of Stylecraft Special Aran in the shades I have used follow this link to enter the competition.

The Stylecraft blogtour runs for the next 2 weeks and you will find dedicated blog posts from many fabulous people such as:

Heather at The Patchwork Heart
Sue Pinner
Sandra at Cherry Heart (you must also check out her beautiful Bali Wrap project here)
Sarah at Annaboo's House
Heather at Keep Calm and Crochet on (who will be the Blogstar tomorrow)
Angie at Le Monde de Sucrette
Phil at The Twisted Yarn
Julia at Handknitted Things
Kathryn at Crafternoon Treats.